For at least two years, 47 year-old Rob Clinton of Rochester, NY, would choke on post nasal drip in the shower. He knew something was wrong in his throat but he didn’t feel any pain.

Did he have cancer? Clinton smoked cigarettes for 30 years and worked in an auto body shop where he was regularly exposed to carcinogens, but he wasn’t experiencing the typical symptoms of throat cancer. These include hoarseness or a change in the voice, difficulty swallowing, a persistent sore throat, ear pain, a lump in the neck, cough, breathing problems, and unexplained weight loss.

In November 2015, Clinton went to the dentist to have his teeth cleaned. His dentist felt Clinton’s swollen neck and recommended that he visit a medical doctor. Clinton heeded the advice and sought the opinion of an ear, nose, and throat specialist at Strong Memorial Hospital in Rochester.

The ENT doctor sent Clinton to have a CAT scan and when he scoped Clinton’s throat, the doctor said, “I see something in there.”

What he saw was a tumor and there were a few other things going on too.

The biopsy showed that Clinton had Stage IVa oral squamous cell carcinoma (OSCC) at the base of his tongue—and the cancer was HPV positive. HPV stands for the human papillomavirus and a recent survey found that more than 42% of Americans are infected with HPV. While most people’s bodies naturally clear HPV after two years, some people’s immune systems do not recognize the virus and consequently, HPV can harbor in the body for decades. HPV-related throat cancer has been linked to oral sex.

On December 4, 2015, Clinton underwent neck dissection surgery at Roswell Park Cancer Institute in Buffalo. Dr. Hassan Arshad, a head and neck cancer surgeon, removed 30 lymph nodes; two had cancer and one tumor was the size of a golf ball. One lymph node on the other side of neck and a tongue tumor would be treated with radiation.

The first of 35 radiation treatments began one month later in conjunction with Cisplatin chemotherapy infusions. That’s seven weeks of simultaneous radiation and chemo.

“I drove myself to treatment for the first five weeks. Up until the last week of treatment, it wasn’t too terrible,” Clinton says. “But then I started getting tired and my mother took me to the cancer center.” 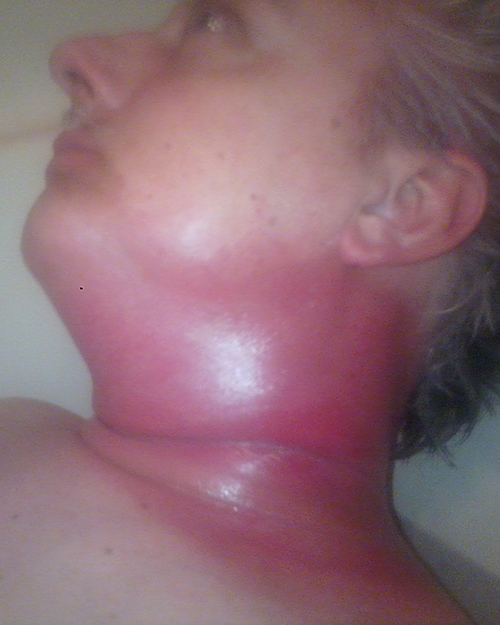 Clinton had decided not to get a feeding tube prior to or during treatment and as the radiation and chemo attacked his cancer, he began to lose weight.

The treatment reduced Clinton’s appetite because foods began to taste different. For two weeks, he also felt a burning sensation in his mouth and says his saliva tasted like hot sauce.

“It was excruciating and the worst thing I dealt with during treatment.”

Furthermore when radiation makes the throat feel tender and raw, it becomes nearly impossible to eat  normally through the mouth.

Clinton was 215 pounds before treatment. After treatment, he weighed in at a mere 165 pounds. A loss of 50 pounds. In hindsight, Clinton wishes he had the feeding tube inserted while he was still strong.

“Don’t be afraid of the treatment. It’s manageable and you can get through it. I recommend a feeding tube because it’s a comfort knowing you have an option,” says Clinton.

While it took a month for Clinton to recover from the initial surgery, doctors say it takes at least a year for HPV+ throat cancer patients to find their “new normal”—regaining strength, adapting to lingering side effects.

Following chemo, Clinton experienced “chemo brain” or “chemo fog,” known as a cognitive impairment that can occur after chemotherapy. The patient may experience memory loss or dysfunction, and have difficulty concentrating or multi-tasking.

The radiation also took its toll on Clinton. He researched and found a salve made of calendula flowers, olive oil, beeswax, and Vitamin E oil to soothe his parched skin. Trying to gain weight was a bigger challenge. First, his taste went “totally upside down” and spicy foods were intolerable.

And dry mouth is a common result of the radiation treatment. While both sides of Clinton’s neck received radiation, he had less saliva production on his left side. At night he would have to wake up every 40 minutes to drink water. Clinton must make certain not to become dehydrated because it causes the dry mouth to worsen. Now he chews gum almost non-stop.

Clinton joined Dr. Wong’s clinical trial to determine whether ALTENS for six weeks/four days a week would be as effective as treatment for 12 weeks/two times a week.

“Four days a week, the researchers put pads on the inside of my ankles, the outside of my knee, back of my hands, between my thumb and forefingers, and between my chin and bottom lip,” says Clinton.

Clinton says ALTENS felt like little shocks and the acupuncture-like stimulation improved his saliva production by 80 percent. “Even after I stopped ALTENS, my saliva kept improving,” says Clinton.

In fact, the prognosis for HPV-related throat cancer is 85 to 90 percent positive if caught early. In contrast, patients who battle advanced throat cancer caused by excessive smoking and alcohol have a five-year survival rate of 25 to 40 percent. 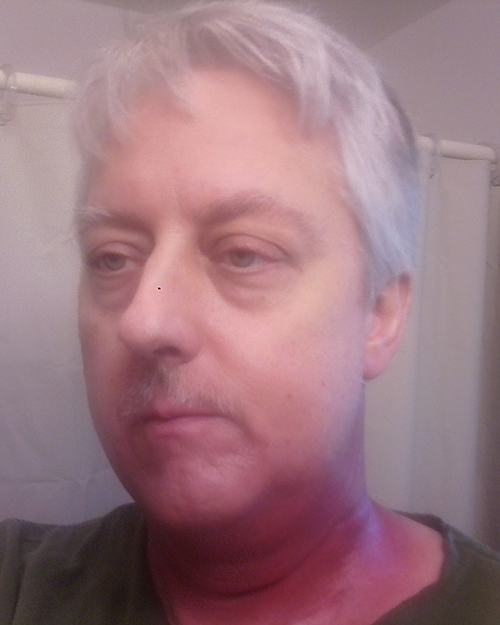 “The majority of tonsil and tongue base (“throat”) cancers are HPV-positive, but smoking is still a major risk factor. Typically, non-smoking patients with HPV-positive tonsil/tongue base cancers present with a lump in the neck, implying that the cancer has already spread to lymph nodes. This used to mean that the patient would have a reduced chance of long-term survival,” Arshad says. “We now know that for nonsmokers who have HPV-positive cancers, metastasis to lymph nodes doesn’t carry the same poor prognosis. The newest staging system reflects that change, i.e. Some of those patients who were previously classified as stage IV are now at stage II if the cancer is HPV-positive.”

Clinton is not only faring well physically, cancer changed his outlook and lifestyle.

“My life is pretty much back to normal. I get a little nervous each time I get a PET scan but so far, it shows I am free of cancer,” Clinton says. “I have a better appreciation of things. I live healthy in terms of diet and recreation. I don’t smoke or drink heavily.”

The Future of HPV+ Oropharyngeal Cancer

De-stigmatizing HPV is a key component to building public awareness and acceptance of HPV infection, and the ability to recognize the early symptoms of HPV-related throat cancer. As more and more people are diagnosed with HPV-related throat cancer, the social stigma surrounding the virus is a disturbing deterrent because HPV cancer patients are often reticent to disclose the HPV connection.

In a 2015 public service announcement, actor Michael Douglas who was treated HPV+ base of tongue cancer called for oral screenings but never said “HPV” by name. “A very common virus, one responsible for the vast majority of cervical cancers is now identified as the cause of this rapid rise in oral cancers,” said Douglas.

In the early years of the AIDS crisis, people associated infection with illness, fear, and death. It took a decade to generate a movement and begin to change the public sentiment. Now after continual education, AIDS is accepted and the focus centers on hope instead of ostracization.

Clinton hopes more people will accept that HPV infection is common—the most common sexually-transmitted infection in the U.S., according to the CDC. The American Society of Clinical Oncologists also found that by 2020, the annual number of HPV-related oropharyngeal in nonsmoking, middle-aged men will surpass the number of cervical cancer cases.

“HPV is not a shameful thing. It’s very common. It’s just that some people can’t clear the virus from their bodies,” Clinton says. “This type of cancer is the next epidemic. I feel fortunate every day that I came through it as well as I did.”