Chances are you have never heard of Johanna Silver Gordon. The Michigan high school English teacher died of ovarian cancer in August 2000 after being misdiagnosed, and not knowing much about ovarian cancer.

Her sister, Sheryl Silver, fought for Congress to pass Johanna’s Law in 2005—also known as the Gynecologic Cancer and Education Act. The bill appropriated millions of dollars for an educational campaign focused on the risks, symptoms and prevention of ovarian, uterine, and cervical cancer. In 2021, Johanna’s Law achieved reauthorization to provide continued funding. 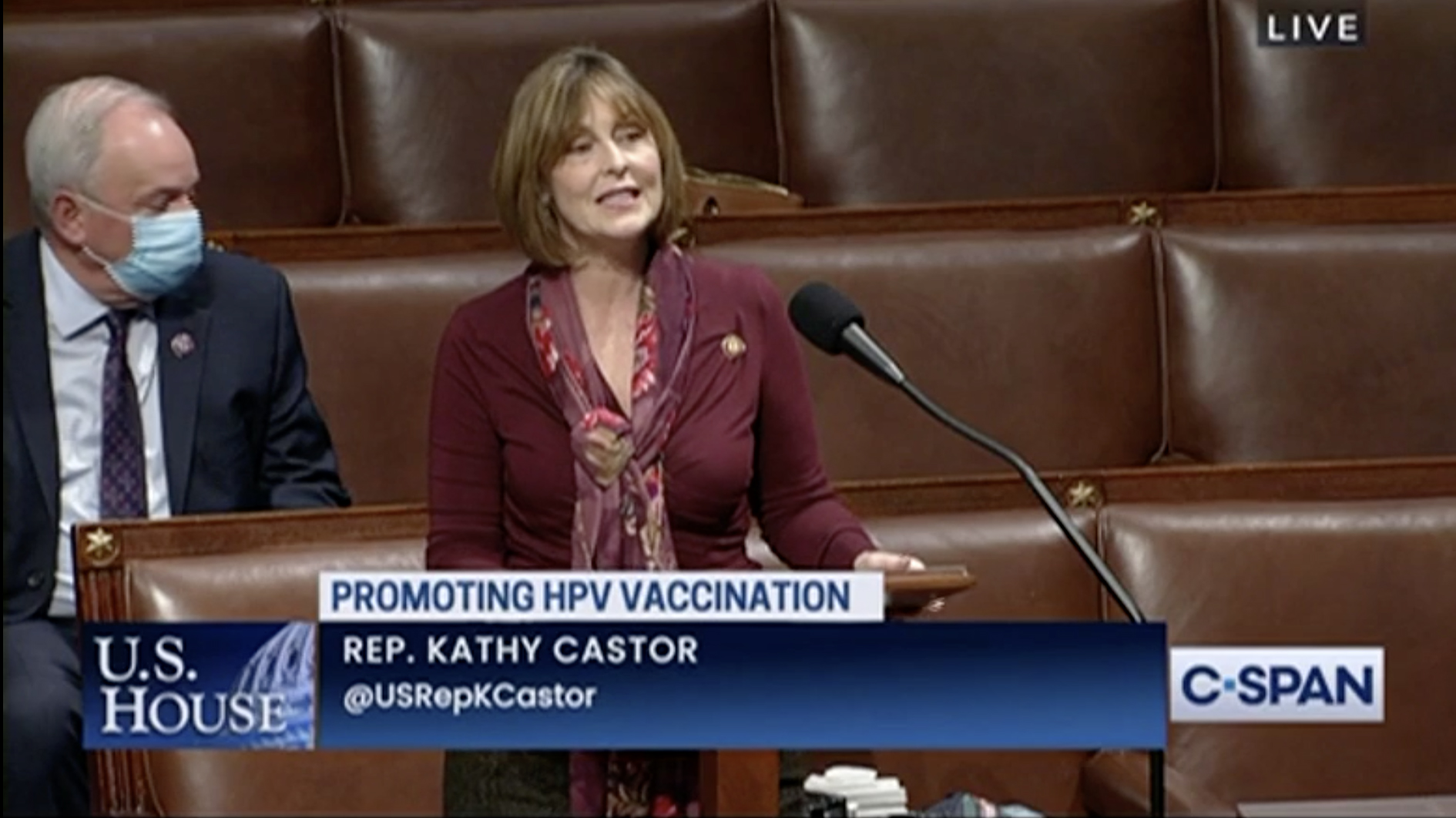 Now HPV cancer education advocates may thank the model behind Johanna’s Law for providing the impetus for the PREVENT HPV Cancers Act, passed by the House of Representatives last month. PREVENT stands for “Promoting Resources to Expand Vaccination, Education and New Treatments” for HPV cancers.

Dr. Giuliano, Rep. Castor, and John DeMuro, federal government affairs director at Moffitt, met in January 2019. They discussed what it would take to write a bill that would garner enough support to pass the House. Merging H.R. 1550 with Johanna’s Law became key.

The original bill included directing funds to additional research at the National Cancer Institute, and investments in the CDC’s immunizations infrastructure. The final bill focuses on establishing educational resources about HPV cancer prevention for a national audience, with a specific focus on males and communities most impacted by HPV cancers. The bill would also update the requirements for educational materials on HPV to include the importance of vaccination.

“The PREVENT HPV Cancers Act builds on work the CDC is already doing to raise awareness about gynecologic cancers through Johanna’s Law, and includes HPV and HPV-related cancers in a national public awareness campaign to educate providers, parents, and the general public about the lifesaving HPV vaccine. This is especially important in rural areas where there’s also been a very dramatic drop off,” Rep. Castor remarked in her House speech after the bill’s passage.

Four out of 10 HPV cancers occur in men.

What’s troubling, a December 2021 review by the Partnership for Male Youth found that, “after they reach puberty most males become disengaged from the health care system; unlike young females, who transition from pediatricians to gynecologists for their health care, young males are left adrift for health care once they leave pediatric care.”

As a result, young males are not learning about HPV cancer prevention.

As a result, there is an entire group of young men (who, in 2009, fell in the 11 to 26 recommended age range) who may have missed vaccination. These boys were born between 1983 and 2010. Given the slow uptake of a new vaccination recommendation, pediatricians may not have recommended the HPV vaccine to this population. Consequently, today these unvaccinated young men are now sexually active with no protection against HPV, the most common STI.

If you have a son, nephew, or a close friend in this age group, all they have to do is ask their pediatrician if they received the full HPV vaccine series when they were boys.

How You Can Help Educate

HPV vaccination helps prevent over 90% of cancers caused by HPV.

We must continue to educate those who don’t know this.

Routine childhood vaccinations decreased as a result of the COVID-19 pandemic. HPV vaccination rates also declined. HR-1550 remains an encouraging possibility that more will be educated about the safety and efficacy of the HPV vaccine.

The CDC already provides a wealth of information about HPV infection, the HPV vaccine, and HPV cancer prevention. A new national public awareness campaign must do more.

$25M dollars sounds like a lot of money; however over a five-year fiscal period, it still falls short at $5M annually. Think expensive media buys and unavoidable administrative costs.

Even so, the payoff may be huge.

“Ben Franklin said, ‘An ounce of prevention is worth a pound of cure.’

If we actually eliminate six types of cancer, I think that’s worth more than an ounce to a pound,” says DeMuro. “That’s hundreds of thousands of people not getting cancer and hundreds of millions of dollars of cancer care that we (the system) are not going to be paying for.”

Funding for H.R. 1550 will only become a reality if Rep. Castor can garner support in the Senate.

You can help by writing to your senators to support a companion bill to H.R. 1550. Let them know that this is a no-brainer.

HPV education will save lives. We have a vaccine that can help prevent six types of cancer and we need their support.

Send Your Ideas to HPVANDME

HPVANDME welcomes your input and ideas on how to improve education about HPV Vaccination and Cancer Prevention.

If the PREVENT HPV Cancers Act passes the senatorial hurdle and becomes funded, the work will just be beginning with many questions to answer, and strategies to develop.

What should the messaging be? Who is the target audience? How may we maximize this multi-million dollar campaign to be truly effective?

For example, we know that more pediatricians must include HPV vaccination in their patients’ standard childhood vaccine recommendations. It’s not about singling out the HPV vaccine.

“I hope some of the funds can be concentrated on providers,” says DeMuro. “Doctors just say it’s time for your tetanus shot. They don’t say it’s mandated. Pediatricians may simply say,’It’s time for these vaccinations.’ Then they may answer any questions.”

How do we prioritize public health for our future generations? If we can achieve HPV vaccination rates at 80% and above, HPV cancers may be virtually eliminated in a few generations.