In the late spring of 2013 my mother passed at 85 years, 2 weeks later I was diagnosed with stage 4A right tonsillar cancer with a genetic signature created by HPV 16.  I was numb with all I had gone through and remember the Dr. stated in a matter of fact way “Oh, by the way, you are stage 4”.

Sitting and waiting to hear my next horrific challenge the Dr. proceeded to explain the type of surgery I would need to save my life.  He wished to split my chin between my lower front teeth to allow him to dislocate my jaw outward giving him access to my right carotid artery; which he was sure was fused to my right tonsil as the primary tumor was growing inward. 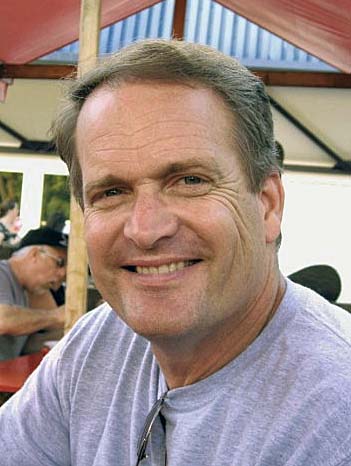 Horrified by the idea of such a radical disfigurement, I approached my business partner Harvard trained scientist Ralph Emerson or Ralph Waldo Emerson 4th.  (Yes, he is related to the original).  Ralph had a friend and Harvard compatriot named Dr. Michael J. Kaplan at Stanford.  I was ushered in right away and met with his team.  Explaining my fears, Dr. Kaplan explained the need for radical de-bulking surgery with HPV 16 tumors is no longer a necessary treatment in my particular case.  Dr. Kaplan designed a radiation/chemo protocol directed at my cancer.  Though I was stage 4A, it was important to note the secondary tumors were all in immediate lymph nodes nearest the right tonsil.  This was explained to be very fortunate as the primary and secondary’s where all localized.

Onward to the radiological oncologist of Dr. Kaplan’s choice.  I was to receive 7,000 RAD’s over a 7-week period with 3 I.V. treatments of Cisplatin.  I was well rehearsed on the hell I was going into, but I had no idea what laid in store for me.  Radiation didn’t really bother me until much later; but, after only 3 days of cisplatin I was glued to the porcelain throne.  Within 2 weeks I lost 40 lbs. and began to look like a war camp survivor.  My face aged 20 years with deep lines and I was losing muscle tone fast.  Thankfully, I elected to have a feeding tube as I believe this was what saved my life.  Eating orally was impossible, my gag reflex would not allow me to swallow food yet alone water.

As the weeks progressed my mouth became a war zone and the only soothing treatment was mild saline/sodium bicarbonate solution.  My mouth was raw, open sores, exposed bone and a fire that could only be dealt with high dosed of narcotics.  I must say, thank God for the narcotics as they made the experience tolerable and aided greatly with the severe anxiety that plagued me the entire time.  Truly,  if you’re going through a life and death treatment like this, narcotics are the least of your worries.

The most freighting moments came on with my change of tasted and lack of saliva.   At first I was producing massive amount of saliva in response to the cellular destruction going on in my mouth.  It seemed this would never end when the day came that I could taste nothing and my saliva turned from massive to a thick – ropey – choking dilemma.  This condition would have me fearing to fall asleep as I was sure I would choke to death.  Using Mucinex and a nasal saline spray I made my way through this period.  During this time, I kept my teeth clean using saline/sodium bicarbonate with warm water at the lowest setting of my water pick, the tooth brush was far too harsh.

Around half way through my treatments I started having side effects that were life changing.  While at my desk, working on the computer, I began to see a dark cloud forming in my left eye.  The next day, many black particles began floating around, floaters.  Two days later I was blind in my left eye.  My retina had detached and now I was in emergency eye surgery.  The first surgery did not take and a second was performed.  Today, I have reasonable vision in my left eye.

The common cold was no joke.  Cisplatin had lowered my immune system and the common cold quickly became a hospital emergency.  I.V. antibiotics and fluids and I was off to the races.  It’s important to note, you cannot miss any of the treatments as cells can quickly become resistant during this time.  No matter how terrible you feel, you must go to your treatments.

Burns around my neck set in during my last couple treatments.  This was difficult, tissue was really pissed off at this point.  A little trick I learned during this period was:  I used my oral Xylocaine rinse on my neck prior to bathing.  The burns are quite painful and this was a god send.  Cleaning these burns and removing the yellowing cake like coating shortens the healing time.  Keeping as clean as possible is extremely important.

Nearing my completion of treatments, I began to miss foods.  Foods that I could not possibly eat.  I still had no sense of taste and plain water was like acid on an open wound.  But, yet those desires for all things, hotdogs.  Now, I’m not a hotdog eater, but somehow, I was plagued with the desire for hotdogs.  Not being able to eat a hotdog made me want to eat one that much more.  I recovered my new sense of taste 18 months after my first treatment.  My taste came back with a new appreciation for vegetables, especially tomatoes.  I lost a great deal of taste for sugar, even to this day, I cannot taste sugar or vanilla. Well, this is not all bad, as who really needs all that sugar?

I lived with my feeding tube for 8 months as my oral recovery was slow and painful.  By the eighth month I was sure this tube had to go, even if it meant starvation.  After removal, eating was a slow process.  Swallowing was a new experience and my saliva had not returned to its full potential.  I learned to eat foods that were more sauce like.  Meat required a great deal of chewing would subsequently get stuck at the back of my throat often and milk was far better than water for rinsing things down.

Gaining weight, now who would have thought you’d ever have trouble with this, right?  At my 14 month, post treatment I’m a 5’10” man with a whopping 140 pounds, a skeleton. The hair on the back of my head was growing back; however, my neck whiskers never did, but who’s complaining.  My metabolism had changed; however, my body was refueling itself and every cell was like a rebirth, after all, chemo kills everything.

Promises to God, and everyone has them.  During my worst days, I would lay in the bottom of the tub with the shower on; but, very slow water usage as to allow the water heater to keep up with just lying there, sometimes for hours. This was a simple pleasure that gave me a chance to relax and be with God.  A very private time where I discussed death and recovery.  I never made promises I couldn’t keep. This is extremely important as your life has changed and you’ve been allowed to witness this change and not die.  For me it was my family and grandchildren that kept me going, still to this day.

Side effects.  They come, at the most inopportune times.  Neuropathies – fatigue – struggle with weight gain – strength and the worst of all depression.  During the entire process, I focused on survival.  You don’t have time for self-pity, it’s not even an option.  Getting back to who I was -was more important than anything.  But, a funny thing happened on the way to recovery, that persons gone forever.  That’s not to say I’m not the same inside; but, changes I’ve learned to deal with and really learned to hate, have forced me to reconcile with my new lease on life.  Oh, I’ve regained my weight to 172 pounds, my facial deep lines have filled in and my hair is full again; but, fatigue and depression can sometimes rule the day.  Fatigue is, for me, my body’s way of saying you’ve been through hell, and by the way, it’s getting better.  Depression, that’s the self-realization that you’ve changed forever, like a soldier’s PTSD, it’s been one hell of a ride.  Neuropathies, I wear hearing aids due to Cisplatin and nerve damage.  Vocal, I have lost the use of my voice, it’s now rough and soft and some people have trouble understanding me, this is due to radiation damage or Cisplatin; but, no one really knows for sure.  The good thing?  I can have selective hearing and no vocal response should I choose to ignore the conversation, but I digress.

Today, I’m going through parabolic oxygen therapy to rebuilt vascular damage with very good results.  Some people (Most) would say: “Now after reading your story I don’t want to go forward”.  I say, as bad as it’s been, I’ve grown more in three years than in any other time of my life.  I’m alive and I love the smiles on my grandchildren’s faces and for that, I’d face the gates of hell.