Cancer grows, cancer kills. For those who retain optimism in the face of pain, cancer may provide a reboot on life. That’s Rob Paulsen’s story, although he didn’t know it when he first felt a lump in his throat in February 2016. A biopsy confirmed: HPV-related stage III squamous cell carcinoma. Yet Rob is a HPV throat cancer survivor.

When Rob sent me his 2019 book, Voice Lessons: How a Couple of Ninja Turtles, Pinky, and an Animaniac Saved My Life, I knew that I needed to read Rob’s story in a place where I would not be interrupted. I waited for a place where I would also feel safe. After all, I would be experiencing someone else’s pain, and that would bring back memories of my husband’s own battle with HPV throat cancer. I found an unlikely yet ideal place when we went on camping during Colorado’s early November storm. Under the tent’s white canvas walls and the falling snow outside, I dived into the book’s 200 pages. Rob writes about growing up, his dreams of becoming an actor, what it’s like to suffer and beat cancer, and how he emerges “better” on the other side. 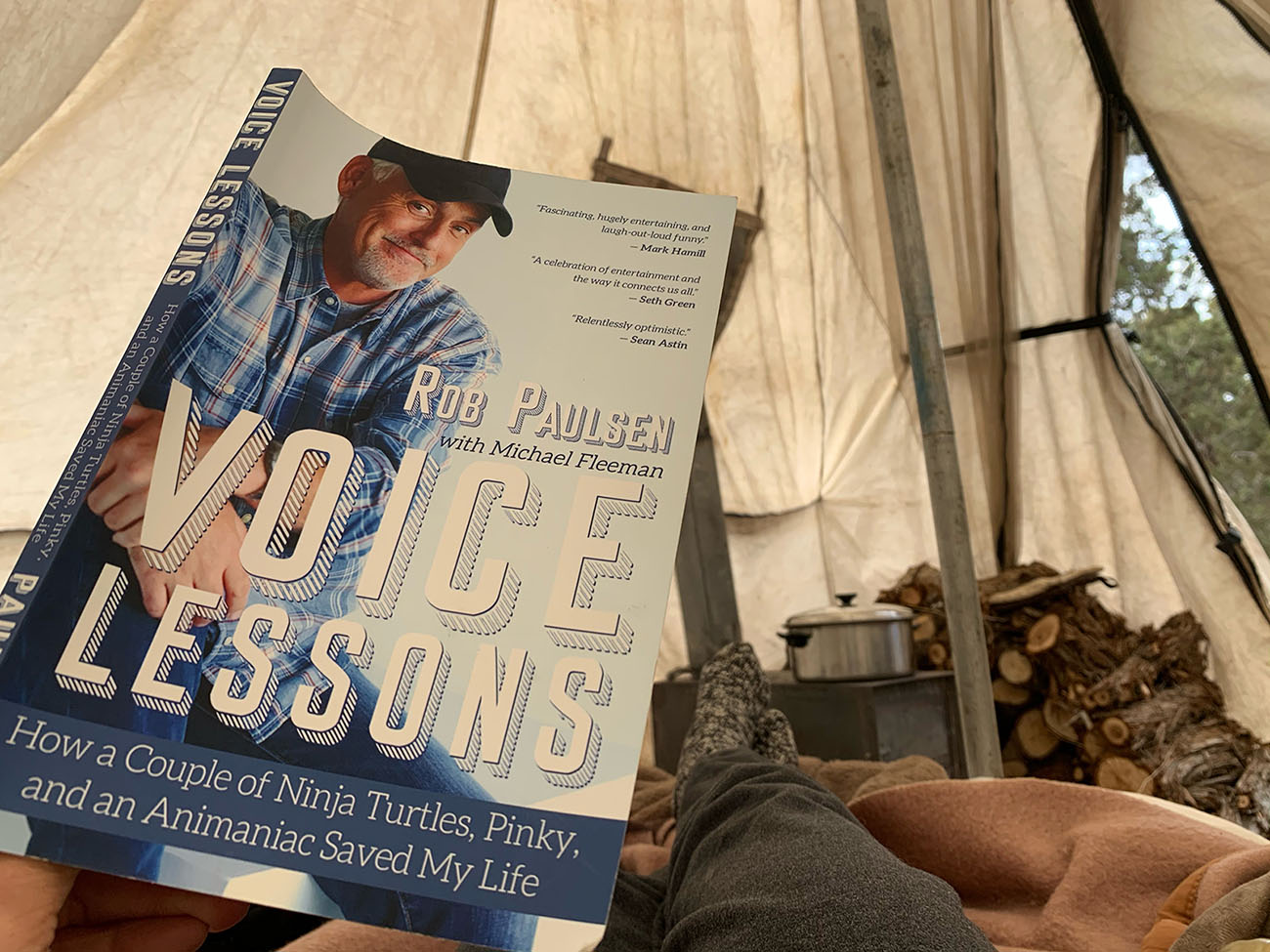 Rob Paulsen always loved to entertain people. Against his parents’ wishes, Rob quit the University of Michigan to pursue an acting career. He moved to Los Angeles with a song and a prayer. His all-American boy-next-door personality landed him in many commercials including Jack in the Box’s Frings and later, as Honda’s Mr. Opportunity. Eventually Rob moved into cartoons because he is not only able to generate a multitude of voices—Hadji on Jonny Quest; Fowlmouth on Tiny Toons; Snow Job on GI Joe; and Carl Wheezer on Jimmy Neutron: Boy Genius—Rob could sing in character.

For a voice actor like Rob, receiving a throat cancer diagnosis is like a pilot being told he could lose his sight. Or a musician learning he may become deaf. His doctor told him that he couldn’t guarantee that Rob’s voice would be the same after treatment. On March 21, 2016, Rob began seven weeks of simultaneous radiation and chemotherapy.

The treatment left Rob 50 pounds lighter and weaker than he had ever felt before. He tired easily. One day he passed out, probably from a decrease in blood pressure. Perhaps worst of all, the radiation had damaged his salivary glands and scorched his throat. Rob’s doctor had not insisted on a feeding tube; now Rob’s perpetually dry mouth could not digest solids and he could barely drink anything but water. He had no ability to taste anyways.

Over time, Rob reached milestones. He was becoming a HPV throat cancer survivor in small but meaningful ways. As the new year dawned, he was able to eat Cheez-Its, one of his favorite snacks, but only when he broke the crackers into smaller pieces. By March 2018, Rob went a step further, spontaneously uttering a coo-ing sound (Compass the Pigeon from Curious George) that had eluded him since cancer.

If cancer fueled questions and uncertainty, cancer also taught Rob some new things about himself.

In Voice Lessons, Rob recounts more than 30 years of making others smile and laugh, only to discover that when you battle cancer, it’s ok not to be everyone’s “Mr. Happy.” Even though he earned hero status as the voice of Raphael, one of the Teenage Mutant Ninja Turtles, Rob the recovering patient learned that he could be vulnerable with his wife, Parrish and son Ash.

“I found that there were times, now when I couldn’t muster the strength to amuse other people,” writes Rob. “And I finally realized: it’s not all about me helping them. It’s about them helping me. Moreover, me allowing them to.”

It was Parrish who wouldn’t allow Rob to drive from Los Angeles to a Comic-Con convention in San Diego; instead she arranged for a car to take him. And when Rob didn’t care about eating because he couldn’t taste food, Parrish made sure that he drank nutritious shakes that she made herself. The cancer patient’s caregiver embodies a lifeline that no medicine can rival. The only problem for caregivers, they need to be cared for too.

Rob feared having cancer would leave him unable to voice Yakko again; or even worse, that the producers would decide that Rob needed to be replaced by another actor. On both counts, Rob couldn’t have been more wrong. The entire original Animaniacs cast united and the reboot of Steven Speilberg’s “Animaniacs,” on Hulu TV kicked off on Friday, November 20, 2020.

The relaunch treats fans to 13 new episodes of Animaniacs—including the return of Pinky and the Brain. Rob also plays Pinky. NARF!

Despite Rob’s busy production schedule, he has found … no, he has made the time to use his voice to talk about his experience as a HPV throat cancer survivor. Rob became the spokesperson for the Head and Neck Cancer Alliance and worked with HPVANDME on a public service announcement to encourage viewers to learn more about HPV cancer prevention. The PSA also streams on Hulu to coincide with the Animaniacs reboot.

HPV+ oropharyngeal cancer is now more prevalent than cervical cancer yet the public is largely unaware of this, or that the HPV vaccine prevents six HPV cancers. HPVANDME works to educate parents that HPV vaccination at ages 9 to 12 will prevent their boys and girls from HPV infection and HPV cancers later in life. Imagine: a vaccine that prevents cancer. Vaccination is a smart choice. The HPV vaccine is available. It’s a no brainer. The CDC’s most recent statistics indicate, “3,500 new cases of HPV-associated oropharyngeal cancers are diagnosed in women and about 16,200 are diagnosed in men each year in the United States.” Those numbers will only increase but doctors agree that by increasing HPV vaccination rates, we can virtually eliminate most HPV-related cancers in a few generations. Learn more.

Life is full of reboots; cancer’s reboot may be the most challenging, but by far, it’s the most glorious. During an Animaniacs recording session in the 90’s, Rob told Tress MacNeille who plays Dot, “It just does not get any better than this.”

As a cancer survivor, Rob now knows, “I was wrong. It can get better than that. This is better.”