In February when we celebrate Valentine’s Day and love, HPVANDME wanted to focus this month’s blog on HPV cancer caregiver support. Partners, spouses, parents, and friends are caregivers who need caregiving too. Taking care of someone you love is an exhausting journey—both physically and emotionally—and often, caregivers have no one taking care of them. What to say, how to help a caregiver? You can begin by asking him or her, “Are you OK?”

Wendy Grohol found love with Glen Guarneri after they met on an online dating site in August 2007. “He lived further away than I was looking. Almost two hours and over 100 miles away. We met halfway on Wednesday evenings and took turns going back and forth on weekends. I moved in with him a year later,” says Wendy.

The couple settled in a small town in northern New Jersey. They were together for 13 years until Glen passed away on October 1, 2020 after a four-year battle with squamous cell carcinoma in his throat, caused by HPV. He was 63. 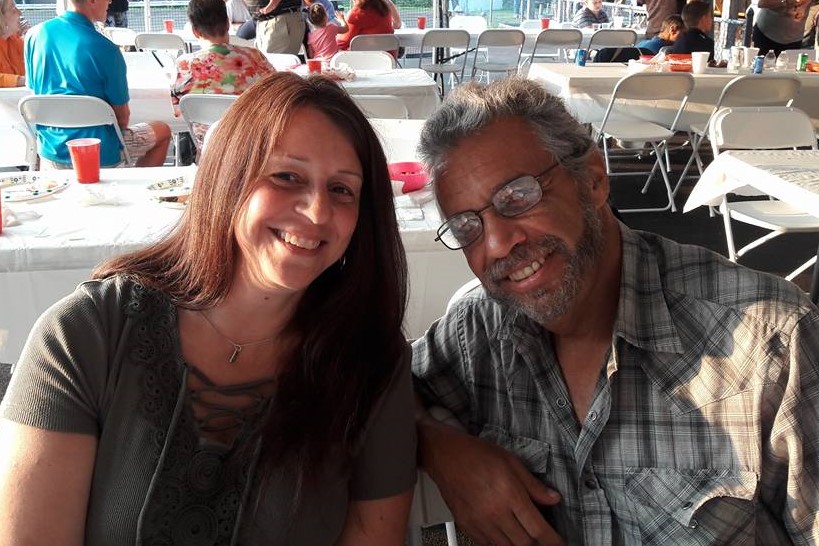 “Glen wasn’t a complainer,” says Wendy. “But there were plenty of trips to the ER and he had some hospital stays. He went through treatments that would work for a while and then stop working and then we would have to try to figure out what’s next. And the worst was the pandemic.”

Glen went through radiation, chemotherapy and two immunotherapy treatments. He was preparing for a promising clinical trial when the COVID-19 pandemic postponed the program. An interim medication later made him ineligible for the trial once it rebooted. Wendy felt frustration.

“I think that was the beginning of the end.”

Some patients have a rotating list of caregivers, a large network of help. More often, the patient’s partner or spouse shoulders the responsibility. Wendy says after losing their mother, Glen’s children from his first marriage shied away from doctors and hospitals. Wendy became Glen’s primary caregiver. She also became tired and skipped some of her own appointments such as going to the dentist. She felt especially discouraged when she would run into other people because everyone seemed to know someone fighting cancer.

I spoke with Wendy five months after Glen died. She has tried a lot of things to help with her loss: an online grief course from the crematorium and a hospice group counselor whom she felt lacked empathy. Wendy found help at Refuge in Grief, an online community and resource.

“Sometimes I feel like I’m losing my mind. You can’t remember things. It’s too easy to get upset,” says Wendy. “They go through a lot of different elements so you know it’s not just you and that you’re not just losing it by yourself.”

When Glen first felt a lump in his neck, he didn’t go to the doctor right away giving the tumor time to spread. If caught early, HPV-related oropharyngeal cancer has a 85 to 95 percent positive prognosis.

“You don’t know what to expect. You’re told this is an easily curable cancer. If something’s not right, get it checked out,” says Wendy. “Glen was pretty special. I had waited my whole life to find him.”

In Florida, Ronni Mendelsohn experienced a bit of a sunnier situation in the face of cancer. When her husband, Jason, was diagnosed with HPV-attributed tonsil cancer at age 44, Ronni was lucky to lean on a full support system. She remained optimistic thanks to a HPV cancer caregiver support network of family members and friends.

“Know that even when it’s bad. It will be better. And as hard as it might be, be positive and be kind.  You have no idea what other people are going through either. When it seems like your world is crazy, other people are fighting their own battles. Our families did whatever was needed to help us. And we have friends that either helped me with the kids or sat with Jason,” says Ronni.

Their family includes three children, two sons and their daughter, Lauren, who was 12 years-old when her father was diagnosed.

“I was young, but still aware of the severity of my dad’s condition. He was in bed for at least 20 hours a day, spitting into a cup, losing significant weight, and constantly going to doctor appointments,” says Lauren. “In school, I did not talk to many friends about what was going on at home. My friends knew my dad was battling cancer, but they made jokes because they were immature and were not educated.”

Helping children cope with cancer begins with communication. The experts say it is important to talk about treatment, and the side effects that will follow. Of course, how and what one says depends on the age of the child.

Today Lauren is a college student and she uses the experience of her father’s cancer to try to educate others about HPV cancer prevention. And after recovering, Jason launched his own HPV education campaign, dubbing himself, “Superman HPV.”

Together, they encourage young people and parents to learn about the HPV vaccine that prevents six HPV cancers.

“I did not know much about HPV or the vaccine at the time. I only knew I was going to get vaccinated because it was a part of my annual physical. If at all possible, the vaccine should be required for young people. I encourage every boy and girl to get vaccinated. Parents should educate themselves about the virus, so they can explain it to their children,” says Lauren. “I believe that every young adult should be aware of who their sexual partner is and how many other sexual partners they have or have had.  Additionally, it is imporant to only have protected sex. It is essential for our generation to be educated about HPV and the seriousness of the disease.”

No cancer story is alike. During treatment, my husband, Jeff, and I holed up at home just waiting for it to be over, and for the recovery to begin. I was thankful that our children were away at college and that they didn’t have to witness Jeff’s suffering. The time passed under a surreal fog of fear mixed with hope. Jeff’s pain increased as his weight decreased, eventually by 50 pounds. I felt a profound loss of control. I kept my job but worked at home. I didn’t see anyone. No one really came by to visit. Not because they didn’t care; I think it’s because they didn’t know how to help. And I didn’t ask. In hindsight, I think that was a mistake. All caregivers of HPV cancer patients need a (HPV) cancer caregiver support network.

Caregivers need caregiving. Programs such as Imerman Angels offer (HPV) cancer caregiver support in the form of “peer to peer partners” for patients and caregivers. The network allows people to talk to others who have been through their own cancer journey, to ask questions and gain answers, and to embrace genuine empathy.

Halfway through Jeff’s treatment, a friend invited me to a Bruce Springsteen concert. I’m a huge fan and my husband told me to go while his cousin stayed with him for the evening. It was an hour’s drive but it was worth it; our special VIP tickets put me a small pit right in front of the stage. For those few hours (Bruce always puts on a long show), life felt normal. I sang and smiled. I didn’t feel guilty about leaving Jeff at home because I knew he was with someone who loved him and he probably needed a break from me too.