“Something’s in my throat, it feels like a lump,” said my husband, Jeff. As many wives would react, I encouraged him to see his doctor. Jeff’s primary care physician said he had “post nasal drip,” prescribed some nose spray, and sent him home. The doctor never thought it could be HPV throat cancer.

The lump didn’t go away. It only got bigger.

That was December 2011. Three months later, after two more visits to the doctor, I insisted that Jeff see a head and neck specialist. Jeff could now barely swallow, let alone eat his food.

The head and neck surgeon used a flexible laryngoscope to peer into Jeff’s throat. He found the lump, a tumor. A few days later, the biopsy revealed that Jeff had HPV-16 squamous cell carcinoma, more commonly known as HPV-related throat cancer.

By now, it was too late for the tumor to be removed surgically. Jeff underwent seven weeks of simultaneous radiation and chemotherapy. He had a feeding tube inserted into his stomach. He lost 50 pounds. We didn’t know if the late intervention destroyed all of the cancer. So far, he remains cancer-free.

Fast forward to 2017. Scientists and developers at Vigilant Biosciences, Inc. in Fort Lauderdale, FL, have combined technology and science to develop a test for early detection of oral cancer and oropharyngeal cancer, commonly referred to as throat cancer.

Vigilant claims its OncAlert® Oral Cancer LAB Test, OncAlert® Oral Cancer RAPID Test, and OraMark™ developed by OncAlert Labs are the “first and only commercially available technologies” that accurately detect and measure the two indications scientifically associated with oral cancer and oropharyngeal cancer—CD44 salivary protein marker and overall total protein concentrations—possibly at the first and earliest signs of a tumor. 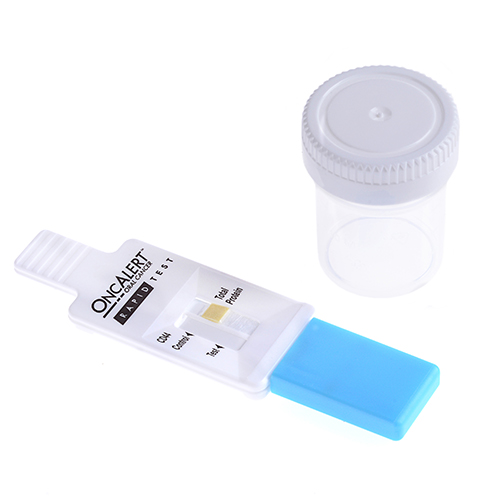 “When normal tissue exhibits dysplasia, you see the CD44 marker come to the surface of the tissue where it can contact in the saliva,” says Dr. Elizabeth Franzmann, Vigilant’s Biosciences’ scientific founder and chief scientific officer.

Up to now, oropharyngeal cancer testing has been especially challenging, because it is difficult for doctors to comprehensively swab the deep crevices or crypts on the base of the tongue, or in the throat. In short, there is no PAP smear equivalent for the throat.

What’s novel and marketable about Vigilant’s tests is that they are based on measurements of proteins captured in an oral rinse: easy to administer and non-invasive. The patient gargles with a liquid rinse that can reach the back of the throat.

The OncAlert® Oral Cancer product line measures these proteins with two different approaches to aid clinicians in the detection of oral and oropharyngeal cancer. Clinicians collect and test the rinse in the medical office using a point-of-care device that combines a test strip for the CD44 marker and another test strip for total protein concentration. Alternatively, as well as additionally, there is a further quantitative test performed at the lab on a separate oral rinse collection. The lab test can provide the additional data points for the markers, that along with clinical factors, may aid the clinician for a more accurate and possibly even earlier detection. The results may suggest a likelihood of oral cancer if either the CD44 or protein test are positive when compared to a visual exam alone.

“The results may also be used to rule out cancerous symptoms to minimize unnecessary testing (including painful and invasive procedures) and associated costs to the patient,” says Matthew Kim, Vigilant’s founder and CEO.

Dr. Franzmann became interested in developing an oral cancer test after she noticed that many of her patients were coming to her with big tumors, at advanced stages of cancer. Many had delayed seeking medical help because they had poor access to healthcare.

“It was frustrating knowing that if we caught the disease earlier, we could treat it better,” says Franzmann, who is also an associate professor of otolaryngology and director of head and neck research at the University of Miami.

Among white men, HPV-related oropharyngeal cancer is one of only a few types of cancer on the rise, according to the Dana-Farber Cancer Institute. And the American Society of Clinical Oncologists predicts that by 2020, HPV-related oropharyngeal cancer cases in nonsmoking, middle aged men will outnumber cervical cancer cases. The goal of the oral cancer test is to detect the cancer before clinicians can see the obvious, visual indicators of cancer.

How early can the technology detect cancer? Franzmann says her team of scientists have seen anecdotal evidence suggesting that the markers become elevated when dysplasia begins, and when cancer may develop. However, further development, testing, and validation are needed.

The two OncAlert® Oral Cancer tests have received the CE Marking approving it for sale in Europe. The tests recently launched in Germany and will become available in other European countries in the coming months.

In the United States, Vigilant currently offers an oral rinse test called OraMark™ through its CLIA-certified laboratory OncAlert LABs. A point-of-care product that will be available in medical and dental offices is currently undergoing development and clinical studies before being submitted for review by the U.S. Food and Drug Administration (FDA). Consequently, Franzmann says it will still be a couple of years before the point-of-care test will be available in the U.S. At that time, the point-of-care test will not be available over-the-counter but will be administered by dental professionals; oral surgeons; ear, nose and throat specialists; and head and neck surgeons.

Studies show early diagnosis of HPV-positive oropharyngeal cancer may result in an 85 to 90 percent cure rate. Regardless of all the numbers, cancer patients and their families know that cancer is personal. Dr. Franzmann says her work is equally so.

“It’s been an amazing journey. Our work began as a result of what I was experiencing with my patients. Now we have a better alternative and I enjoy helping my patients understand they might have a disease inside of them but they will soon be able to do something about it at an early stage. There is hope for the future,” says Dr. Franzmann.

HPVANDME does not endorse commercial products. The Onc Alert tests appear to be promising and deserving of our mission to educate and provide support for future throat cancer patients.